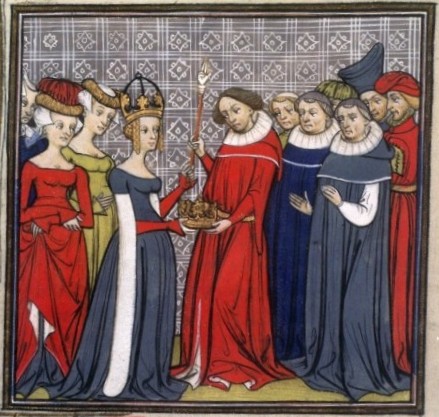 Remembering women of Northumberland - The story of Acha

We have a fine tradition of strong Northumbrian women along our beautiful coast, from the herring girls and bondagers of the 19th century to more romantic heroines like Grace Darling and Dorothy Forster. Today represents an opportunity to celebrate one of the most remarkable women from our early medieval history – Acha.

Churchill famously said “History will be kind to me for I intend to write it.” – and I don’t think I’m being controversial in saying that all history has, perhaps until recently, been written by men and for men. From Plutarch to Livy to Bede – it has been the history of the world according to men where women played faceless bit parts.

This is particularly true of our Anglo-Saxon history which is dominated by stories of warriors and kingdoms and competing religious traditions. But reading between the lines of Anglo-Saxon literature it is possible to get a glimpse of some truly remarkable women.

My particular favourite is Acha. Acha was the daughter of Aella, the King of Deira. The kingdom of Deira stretched from the Humber to the Tees and was neighboured by Bernica to the north. In 604 the mighty Aethelfrith King of Bernica – fresh from having subdued the Irish Dai Riata - killed Aella, and briefly united the Kingdoms by forcing Acha’s brother Edwin into exile, and married Acha. I think it is fair to say that this wouldn’t have been the most auspicious start to married life, but Acha nevertheless went onto produce six children over twelve years. The Royal seat was at Bamburgh – which Historia Brittonum tells us Aethelfrith named after his wife Queen Bebba, so Acha may have also had to contend with a powerful and important first wife.

In 616 Edwin returned from exile and took over the throne after Aethelfrith was killed in battle by Edwin’s ally Raedwald. One would expect the victorious return of her brother to have been welcomed by Acha but the politics of kinship and inheritance, coupled with her motherly devotion, compelled Acha to flee. She made the perilous and treacherous journey west into Dai Riata and sought refuge for her five boys with the monks on Iona. It is thought that Acha and her daughter found sanctuary on a nearby island with a female religious order. This move illustrates that Acha must have been highly skilled in diplomacy, she clearly persuaded the Dai Riatas to protect her and her children despite being the kin of their enemy Aethelfrith.

From here the story of Acha goes cold. It is not known how long she lived or where she died and is buried. Her legacy lived on through her son Oswald who returned from exile after his Uncle Edwin was killed and reunited the two Kingdoms to create Northumbria. King Oswald brought Aidan from Iona, created the monastery at Lindisfarne, and together they converted the north of England to Christianity. Both Aidan and Oswald were sainted by the early church. Acha’s daughter became St Abbs of Coldingham – a deeply, religious women - who was responsible for the Christian conversion of southern Scotland and Acha’s niece was Hilda of Whitby.

Acha was a grieving daughter, an abandoned sister, a dutiful wife, a devoted mother, a fearless traveller and a skilled diplomat. She is not a footnote to history: she singlehandedly ensured the creation of the Kingdom of Northumbria and the ensuing Golden Age – the same Golden Age that enabled Bede to write his History of the English People, in which he overlooks her.