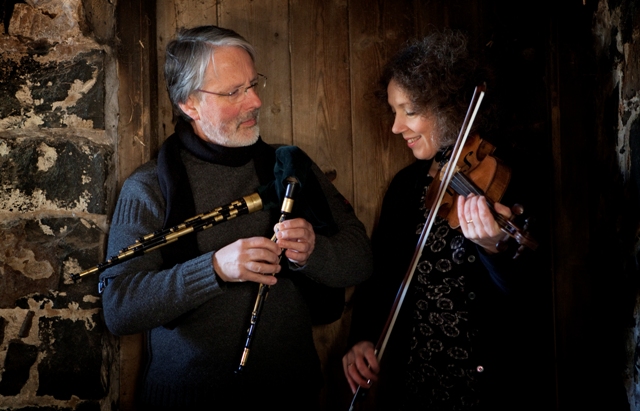 About this photo
Andrew and Margaret Watchorn

Andrew and Margaret Watchorn are holding another series of their popular concerts this summer to raise awareness of the traditional music of north Northumberland.

Throughout the summer, we’re delighted to present another series of concerts in venues along the north Northumberland coast. It’s a privilege to have such a rich musical heritage of songs, dances and local tunes, and we feel it’s very important to share it with other people. Many of the tunes we play come from the Northumberland coast  - whether it’s music from the manuscript book of William Darling in Bamburgh, from the playing of the Cheviot Ranters, from Margaret’s childhood in Embleton  or from local musicians we were lucky enough to play with in the past. Local places also inspire music in the traditional vein. Lively rant tunes such as Dunstanburgh Castle are always favourites, and this year we’ll be presenting Marram, a new tune for smallpipes and fiddle that reflects the atmosphere of our local sand dunes. Songs will include the ballad of Andra Barton, a swashbuckling privateer whose name is engraved on a rock often hidden by the sand in Embleton Bay.

Over 3,000 people have attended similar summer events we’ve organised over the last eight years. This year, we hope that even more people, locals as well as visitors from the UK and beyond, will join us and  enjoy music and songs played on Northumbrian smallpipes, fiddle and guitar, as well as Swedish bagpipes, hummelchen  and nyckelharpa. Music of Scandinavia, featuring traditional instruments from the region, will also play its part, with tunes we’ve collected during our trips to Sweden. It’s fascinating to see how Northumbrian hornpipes crossed the seas in the 19th century to become favourites on the west coast of Sweden!

So put your dancing shoes on, warm up your voice to join in some lively choruses, and come along for a grand night out.

Details of concerts are:

Admission: Pay on the door £7.50. Accompanied children under 12 free.

For further details, contact Andrew or Margaret Watchorn on 01665 576245 or info@pipesandfiddle.co.uk