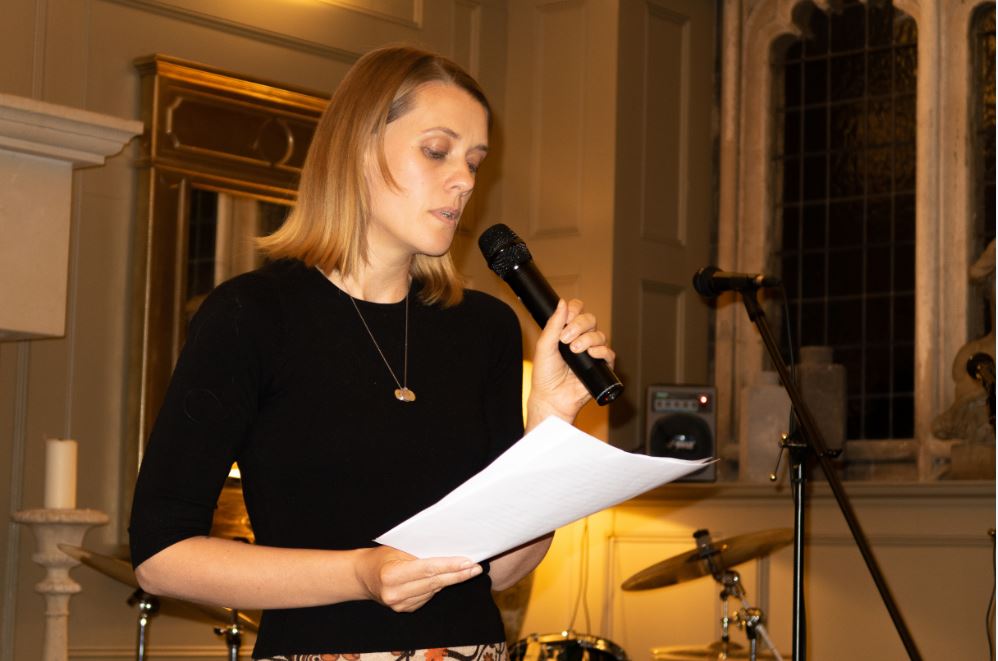 About this photo
Iain Robson

The winner of the Adult category was Ali Millar from Kelso in the Scottish Borders Ali travelled down to Northumberland with her family to be at our prize giving and celebration concert on Thursday. The mesmerising tone of her prose piece came across well when she read it out to the audience.

Between Land and Sea

Newly refugeed we find ourselves at the beach.

The same one my granny was to visit the day her heart finally broke for good; ‘dead’, the Doctor said, ‘before she hit the floor’, as he signed the certificate to make it real.

We find ourselves there, windswept on an overcast afternoon, the sky lowering and thickening and greying, it will be dark soon. A ragged pilgrimage from a city that’s spat us out in a fifth consecutive tory year. A city keen to parade its wares, to pedal its fiction of prosperity at all cost, what cost, when people are pushed further and further to the periphery, out of sight of tourists, of the judges, the law makers, the doctors; the upper echelons, those people with their insulating blankets of wealth and education, safe to believe all it takes is hard work; whilst the others are to be not seen, the disabled, the poor, the not poor enough, banished so as to vanish from the streets until the fiction is not disrupted, the centre will hold, for now, and rents rise, but wages do not and so we are here, countrified now, standing in this impossible space between land and sea.

The boys face the sea as the scudding waves not blue but grey and white and white grey wash up and over their wellies, this northern sea wetting their feet and Vikings always they roar at it but the wind eats the sound they make until it is no sound at all, but a futile thing to be doing on this winter afternoon, but they do not let up, and their screams and the sea’s crashing and the mewing of the circling gulls rises until all is cacophony, until the sound becomes a silence of its own.

This same beach she should’ve visited that summer day that was her last, where she should’ve been wheeled, to eat ice cream from the van on the dunes that is not here today, scared away by the cold, the lack of visitors; she brought me here always on angry days of wind and rain, not for her tourists and stultifying sun; we would storm up the beach, this way then that, on clear days we’d pick out Holy Island, Bamburgh, before back, to see Berwick, Lowry’s chimneys, and then home with salt thickened hair, for roast beef, whisky before bed.

But surely not the same beach, not the same sea at least for the ebb and flow of it, the perpetual motion, the constant immigration of new waters, a borrowed sea then, this temporal state, impossible to demarcate, a folly to try to own. And not the same sand either, for the turning tide and the fragile grains, swept daily back into the waiting mouth of the sea, this is a new place then, containing me and them and him, and my memories unravel, are fragmented and unpicked until I cannot be sure of the veracity of the stormy walks and certain only of feet on precarious, sinking, suctioning surface and the gulls squalling now and the in and out of the rising waves, the sea inching further up the beach, imperceptibly at first but the turning tide now sure and higher and I shout to the boys, up up up, and they run towards the dunes where the grasses don’t whisper but rush rush rush each against the other.

And I wonder then as I watch them with their jeans soaked, darker at the bottom than the top, their wellies slosh slosh slosh as they try to run from the water, I watch their faces whipped red from the wind, and their hair blowing into their eyes and they tip their heads back and laugh. They are two and three and are sensation only, liminal, between language and not language, preferring instead to fall into their body and the things that speak to it, their edges bleed into the wind, the water, the froth, and I am here, tightly contained in myself, hoping never to forget this moment, all these moments, of abandon, and yet, and yet, in trying to remember, I put distance between me and them until all I can think of is her and wonder why it was we dared to bury her, what sort of eternal silence were we hoping for, a strange final incantation.

We entombed her on the hill, she can see the chimneys of home, said someone after at the wake, forgetting surely, how deep she was. Why was it we left her there, with the earth piled heavy and damp on her, left her inert, to be eaten. She said, the sea’s in your blood, to me and I said it to them on the way here, I said I will take you back to where I used to go and wondered why we didn’t do the same to her. Why not throw her to the wind or the waves, or better, launch her a flame into it, to be taken, finally, home.

The judges applauded the language Ali had used in her story, which they said, gave it an amazing hypnotic quality.