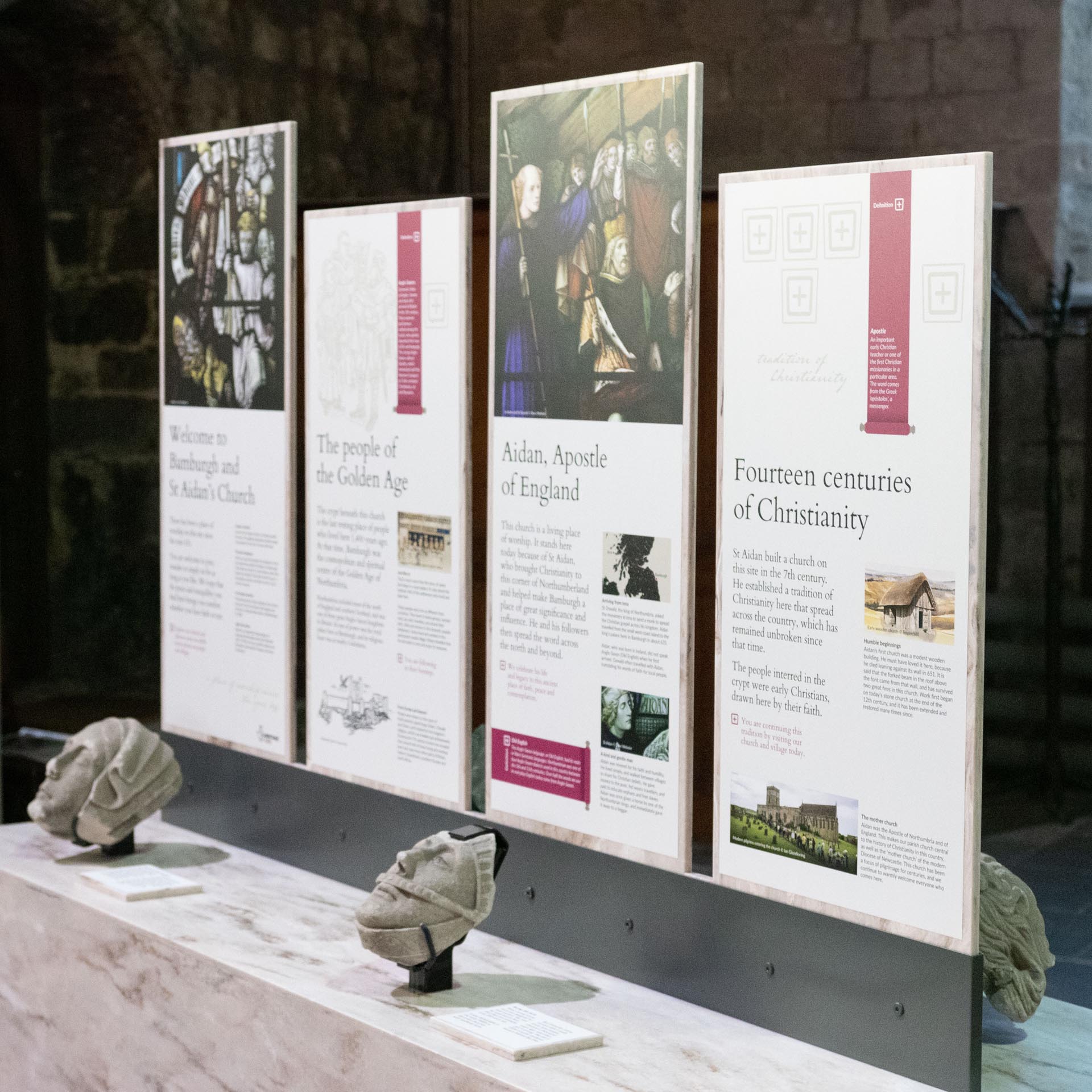 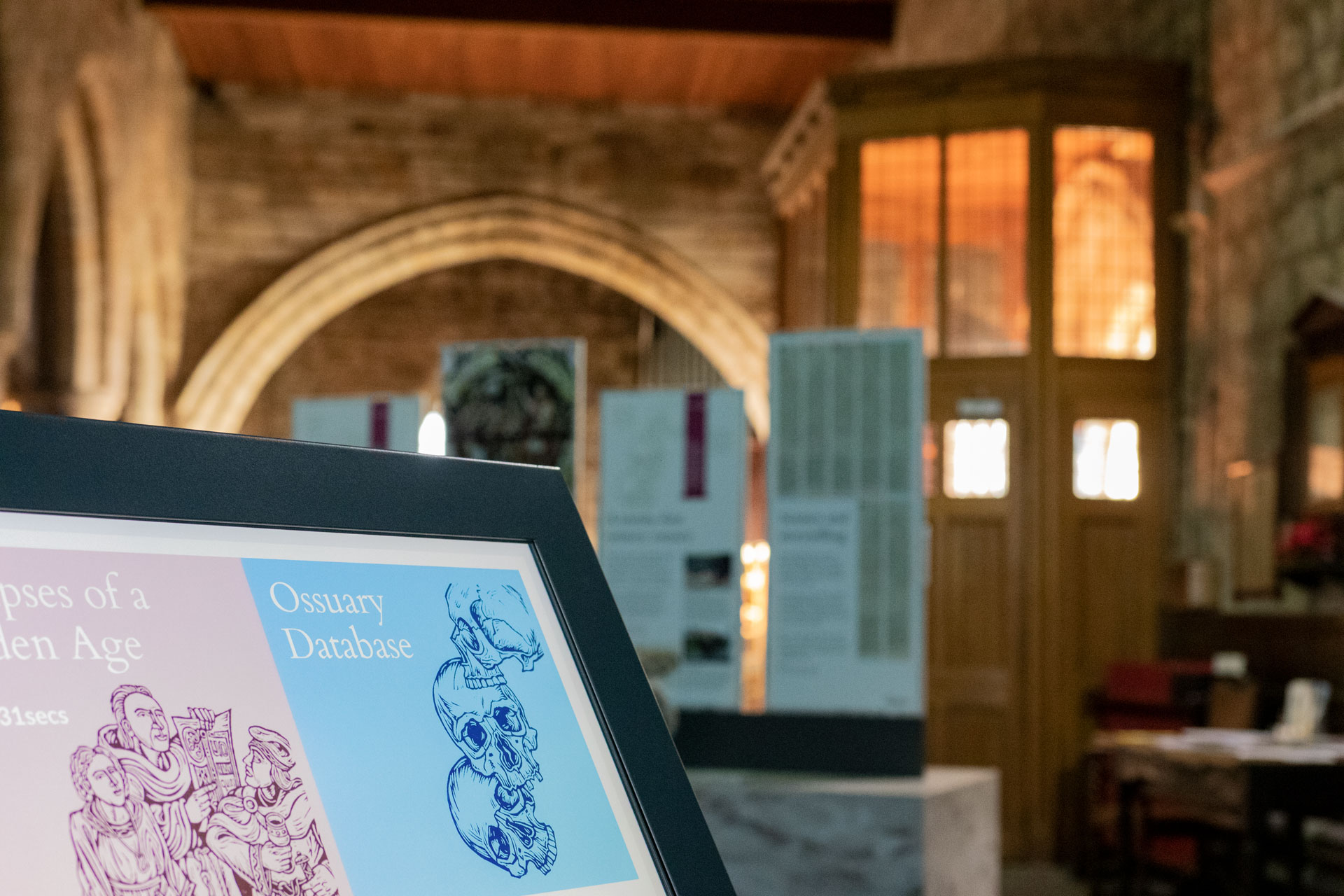 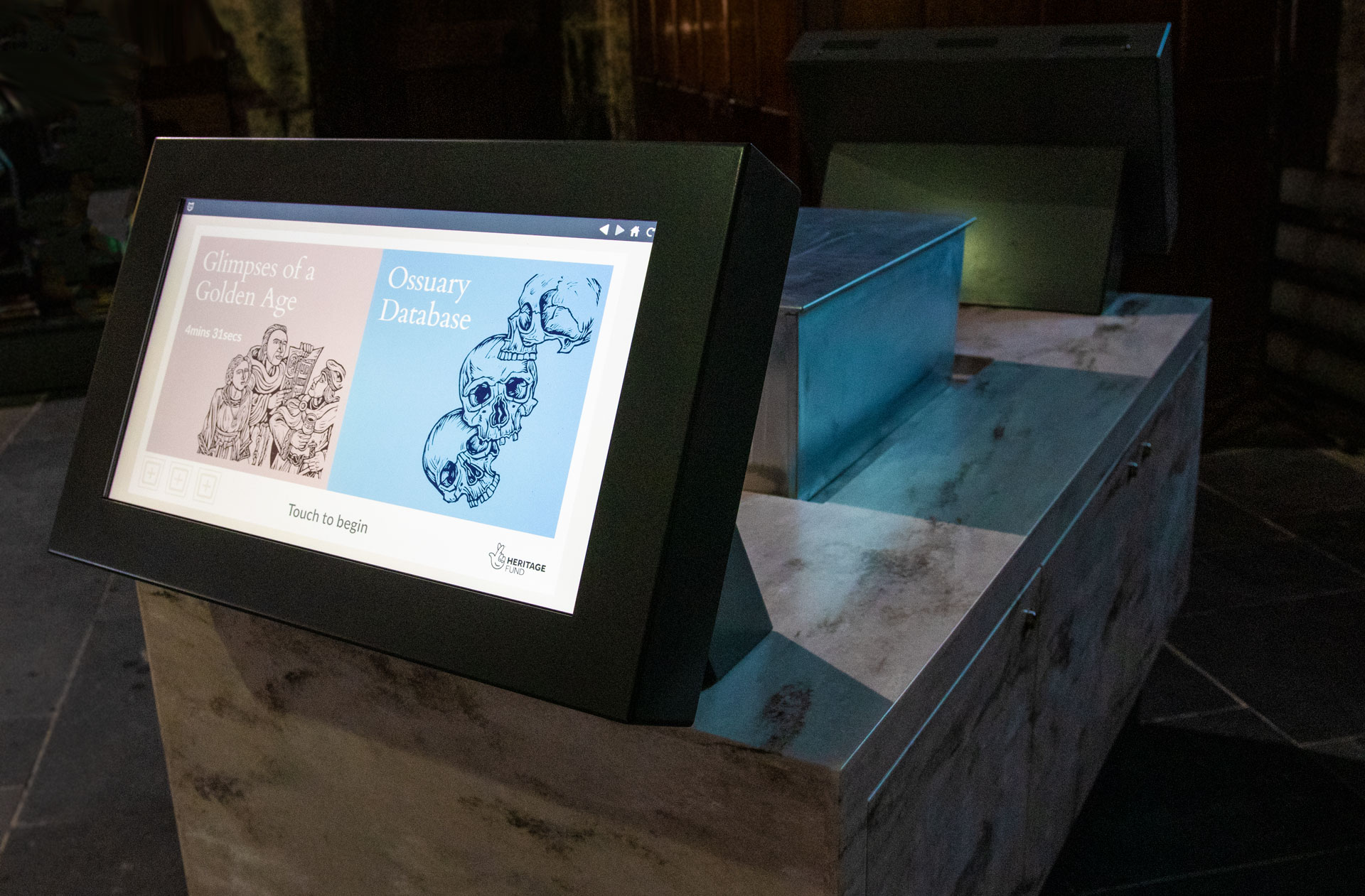 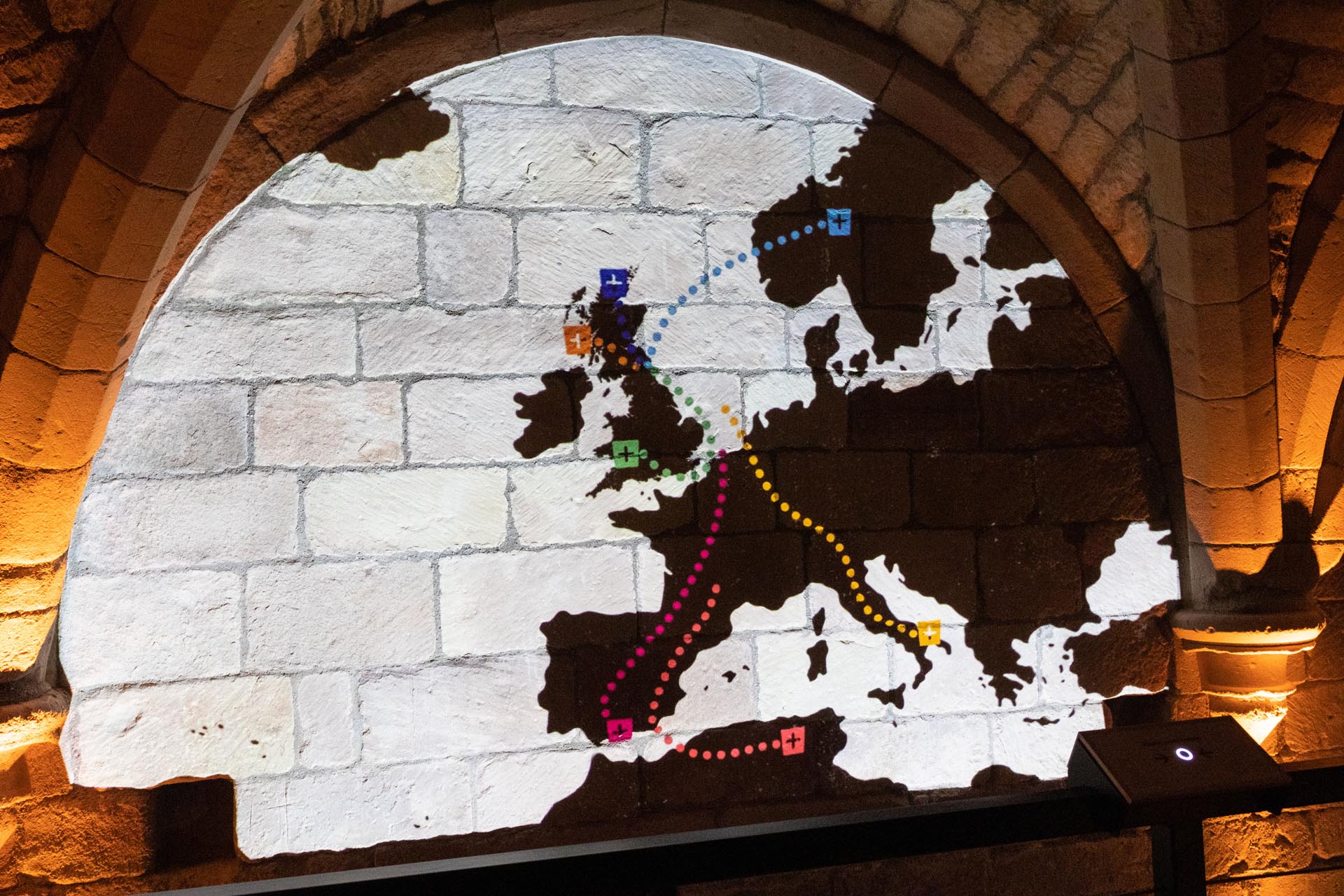 About this photo
Interpretation in the crypt Andy Gardner 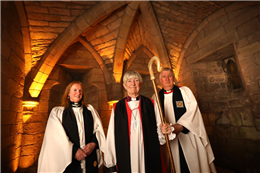 About this photo
Official opening of the crypt Crest Photography

Previously hidden secrets and insights into the lives of Bamburgh’s Anglo Saxon past has been unveiled through new cutting-edge interpretation recreating Northumbria’s Golden Age.

The interpretive display and unique interactive digital ossuary at St Aidan’s Church and Crypt in Bamburgh, tells the story of 110 skeletons dating back to the 7th and 8th centuries unearthed from what is believed to be the burial ground for the royal court of Northumbria. The digital ossuary is also available online through a new dedicated website Bamburgh Bones

The medieval cemetery known as the Bowl Hole was discovered beneath sand dunes just to the south of Bamburgh Castle – once the capital for the powerful kings of Northumbria.

Now, with the help of advanced technology, the secrets these ancients took to their graves 1,400 years ago have been unlocked and brought to life for a 21st century audience thanks to a £355,600 grant from the National Lottery Heritage Fund, which has also seen the reopening of St Aidan’s beautiful 12th century crypt to the public once again.

Among the startling revelations is that far from being a quiet, rural village, Bamburgh was a thriving and cosmopolitan hub drawing people from across Europe to live and work – including St Aidan, who travelled from Iona at the invitation of King Oswald to establish Christianity in the area and founded a place of worship in 635AD on the site of the present church that bears his name.

Isotope analysis has revealed that less than 10% of the 110 skeletons came from the immediate Bamburgh area, with most originating in the wider British Isles, particularly Western Scotland, and even as far away as Scandinavia and the Mediterranean.

It is proof, says the vicar of St Aidan’s, the Revd Louise Taylor-Kenyon, that people have always travelled, and that even in the 7th century “the idea of country boundaries was fragile. It is a reminder that this nation’s history has continually been one of people visiting, settling, intermingling, and creating relationships and a more diverse society as a consequence.”

The interpretive display and digital ossuary allowing the public to probe the wealth of osteological data from the Bowl Hole excavations, is managed by Bamburgh Bones, a collaboration between the Northumberland Coast AONB Partnership, St Aidan’s Parochial Church Council, Durham University, and Bamburgh Heritage Trust. It unites in a user-friendly way the many unique stories of these early residents.

They include a man aged between 17-20 who died after a sword blow cut through his left side from his collarbone to his knee; an Irish woman of around 25 whose skeletal remains show she was almost certainly a weaver or needle worker; and a nine-year-old, whose teeth reveal they were possibly born as far away as North Africa and spent their early childhood in France.

The skeletons excavated, analysed and researched over a 20 year period, were again laid to rest in 2016 in individual ossuary boxes in a smaller second crypt within the main one at St Aidan’s.

Access issues had meant that the crypt was only open to the public by special arrangement. However, new stairs have been built to enable access to the main crypt, from where the second one with its neatly stacked ossuary boxes containing the bones, can be viewed.

On entering the crypt, visitors are met with a short linocut animation film that tells the story of the Bowl Hole people, with further information panels and the digital ossuary available in the church.

It is hoped the Bamburgh Ossuary will help spread the word about an under-represented period of the area’s history – namely the regional, national and even global role it played in the spread of Christianity and Anglo Saxon culture.

Jessica Turner, the Project Officer, says: “So far, little has been made of this period in Bamburgh’s history, when people travelled from far and wide to enjoy its rich cultural and religious heritage, and marvel at its beauty and treasures in what is now referred to as the Golden Age of Northumbria.

“It really was a bright and shining age with the melting pot of cultures represented reflected in the likes of the Lindisfarne Gospels with its stunning mix of Celtic, Anglo Saxon, Mediterranean and Arabic imagery and calligraphy.

“The 7th and 8th centuries are often referred to as the Dark Ages, but in Northumbria it was an age of enlightenment. We need to remember that if St Aidan hadn’t come to Bamburgh then we wouldn’t have had the Lindisfarne Gospels and many of the things we now take for granted like Durham Cathedral and the wider North East’s Christian and cultural heritage.

“It’s a story that is long overdue in being told, but the new Bamburgh Bones interpretation and digital ossuary goes a long way to rectifying that.”

The digital ossuary can be accessed free of charge online at Bamburgh Bones where you can also find out more information about the Bamburgh Bones project and visiting St Aidan’s Church and Crypt.

Admission to St Aidan’s Church and Crypt is free. Opening hours are 9am-dusk. 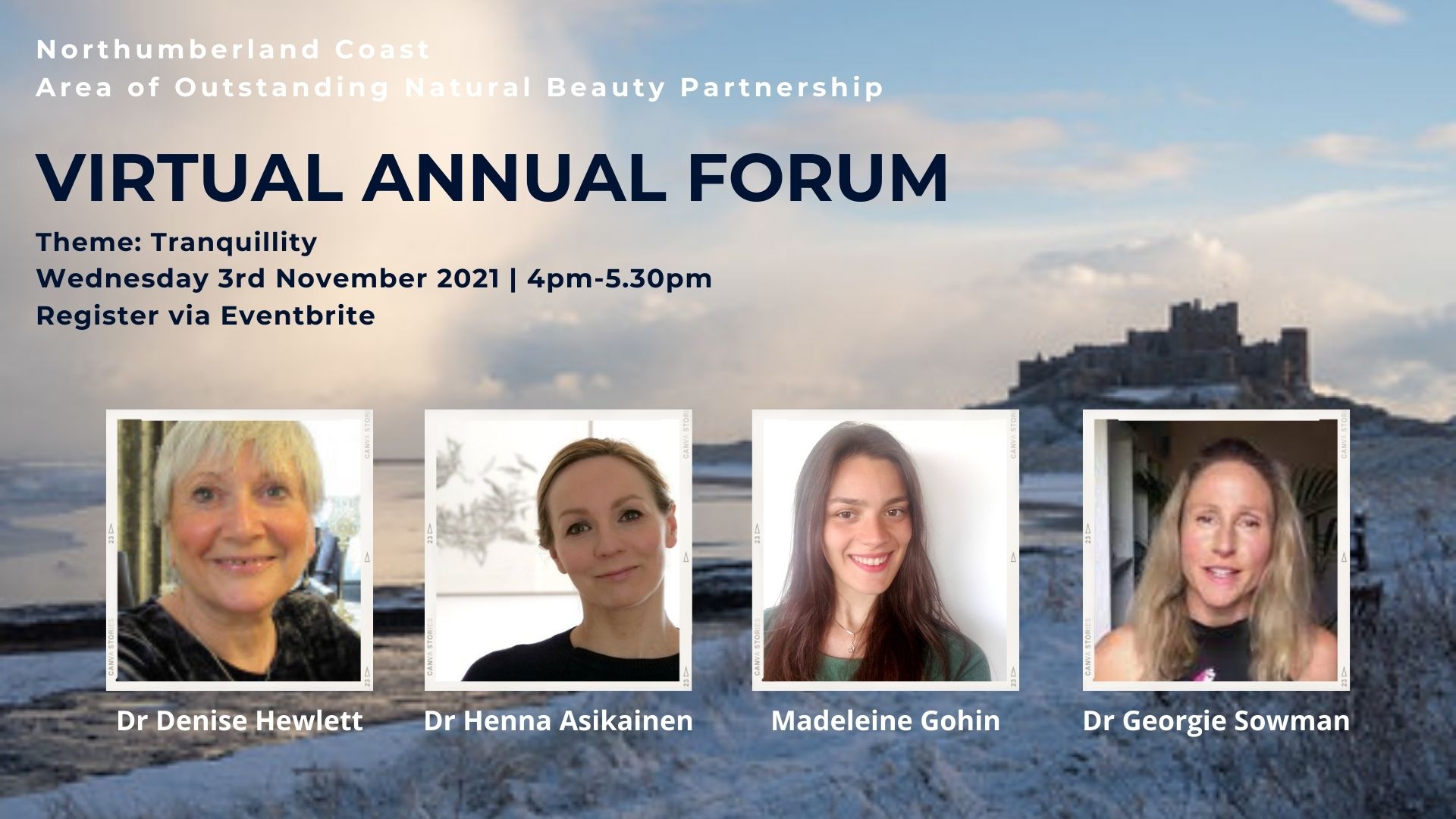 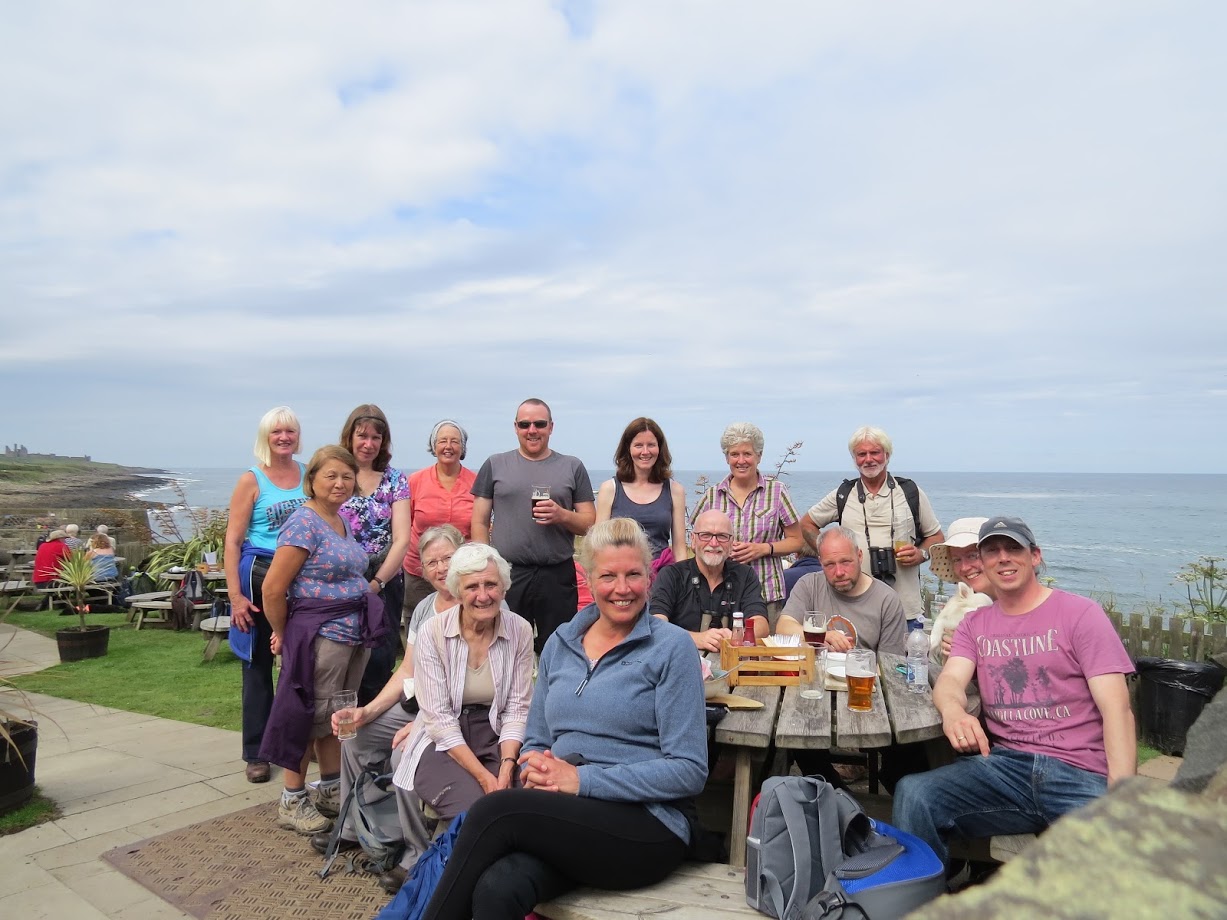