Landscapes for Life Week started this week. It is the AONB Family's week (and a bit) long programme of events to help people reconnect with nature by enjoying and being inspired by the UK's Areas of Outstanding Natural Beauty.

Pat Scott was the first chair of the AONB Partnership. Her choice was Budle Bay at sunset, with the reflections in the water and the sight of the birds.

John Woodman, previous chair of the Partnership, chose the bar of The Olde Ship. It’s atmosphere, history and artefacts symbolise the sea and the fishing culture which drove the development of Seahouses and much of the historic economy of the AONB. Today, it is as welcoming to and as used by both locals and visitors. The buzz and conversations typify the people who work in and enjoy the AONB. It is all about living and thriving, celebrating and discovering the conserved and enhanced landscape.

Cllr Jeff Watson is the current chair of the AONB Partnership. His favourite place is Warkworth Castle, as viewed from the Amble approach. It is both iconic and beautiful. 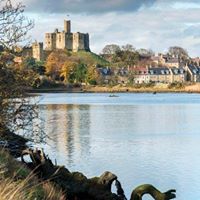 Mel Nicholls was AONB Officer from 2007 until 2014. His favourite place is the Ship Inn at Low Newton - a place where history and culture, past and present, meet in an evocative and convivial setting.

Tom Cadwallender was the Natural and Historic Environment Officer for the AONB before retiring seven years ago. His favourite place is the north shore on Holy Island for its remoteness, splendour and tranquility. It's spectacularly understated.

David Feige, AONB Officer: The Long Nanny - the spectacle of several thousand terns shuttling back and forth with beakfuls of sand eels for their young; dune grasslands full of wild flowers including masses of bloody cranesbill, bird's-foot trefoil and lady's bedstraw, as well as botanical treats such as purple milk-vetch and pyramidal orchid; all set in the stunning landscape of Beadnell Bay.

Iain Robson, Access and Natural Environment Officer: Even on warm summer days, you can still find solitude on Cheswick Black Rocks beach. To get here you've walked through grasslands filled with vetches, cranesbill and knapweed buzzing with pollinating insects and scrambled down over ancient limestone and sandstone geology. Cheswick Black Rocks beach stretches out ahead, merging seamlessly with the vast sands of Goswick. The view seems to go on forever... Holy Island, Lindisfarne Castle, Fenham Flats and beyond to Bamburgh Castle. Offshore, terns feed and gannets plunge, headlong into the sea for a fishy morsel to take back to their chicks on the Farne Islands and Bass Rock respectively. And then a bigger splash amongst the feeding gannets, a small pod of bottle-nosed dolphins are performing acrobatics to impress an audience of one. Me.

Catherine Gray, Communications and Funding Officer: Dunstanburgh - It’s not so much about the castle itself - though what’s not to love? - but more the walk to it from Craster. I like the fact that it's somewhere that’s not easily accessible, that there’ll be no two days the same when you make that walk. It’s the time you have to think about things before you get to where you’re going that appeals to me. But the view of the castle - just ‘wow’! As a good friend once said: “It’ll be fantastic when it’s finished”. 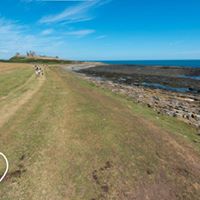 Sarah Winlow, Historic and Built Environment Officer: Newton Gun Emplacement - The view over Budle Bay and Ross Sands towards Holy Island is formidable, as is the view 'on the way back' on the Coastal Path looking down the coast to Bamburgh Castle and out to the Farnes.

Jessica Turner, Accessing Aidan Project Officer: The crypt at St Aidan’s Bamburgh - Located below the 12th century chancel of St Aidan's church, the crypt is a beautifully proportioned and wonderfully atmospheric space. In 2016, the second smaller crypt became the home of the Bamburgh Ossuary housing 115 of our Anglo-Saxon ancestors excavated from the Bowl Hole close to Bamburgh Castle. These people were St Aidan's first congregation and it seems utterly appropriate that their final resting place is in the crypt on the site of church that St Aidan built in 635AD. We are working towards opening the crypt to the public once more from November so that everybody can share in the magical experience of entering this subterranean sanctuary and also learn more about the international significance of Bamburgh during the Anglo-Saxon period.

Find out more from our AONB family by searching #LOVEL4L #NaturalHealthService