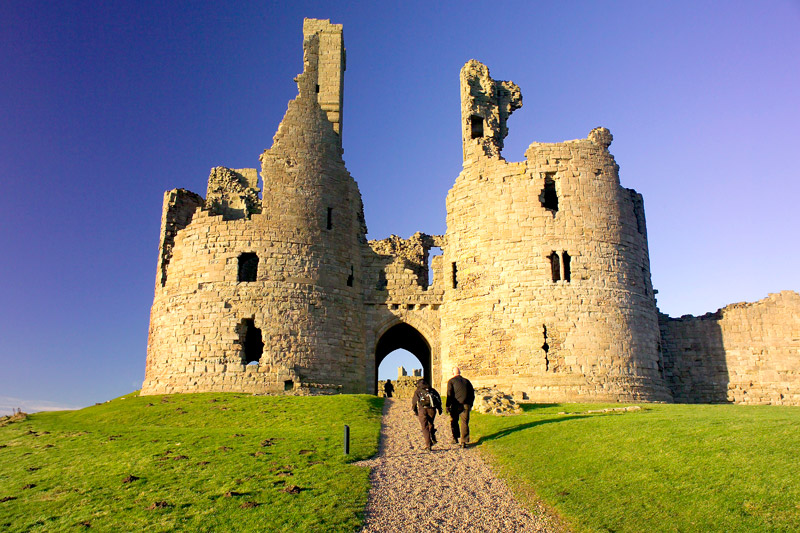 Warkworth Castle is a classic Norman motte and bailey castle built above the loop in the river Coquet overlooking the medieval town below. Probably established in its present form in the late 1100s, Warkworth became one of the most important castles in northern England. It was the favoured residence of the powerful Percy family from the 14th to the 17th centuries and was once home to 'Harry Hotspur', the bane of Scots raiders, hero of Border ballads and Shakespeare’s Henry IV parts I and II.

The castle is a beautiful mix of ruin and habitable rooms with the Dukes apartment in the magnificent cross-shaped keep furnished and comfortable. With the location, crowning a hilltop above the village and river with a fortified bridge it is easy to see way Puvenser declared this as "one of the most exciting sequences of views one can have in England".

Half a mile from the castle, tucked away by the Coquet and accessibly only by boat, stands a much more peaceful building: the Hermitage, a medieval rock cut chapel.

Getting here: Warkworth is served by a twice hourly service (X18 and X20) between Alnwick and Newcastle. English Heritage offer a 20% discount to visitors arriving by bus*. See our Getting Around page for detailed travel information

Dunstanburgh Castle is a complete ruin. The castle is situated just to the north of the village of Craster. Construction of this castle started in 1313 by Thomas, the Earl of Lancaster. Thomas was the wealthiest nobleman in England and leader of a baronial faction that opposed his cousin King Edward II. It is thought that the Dunstanburgh was built as a symbol of Thomas’s power and prestige as well as offering a refuge at a considerable distance from the intrigues and politics of southern England.

Thomas never occupied his northern castle and it is thought that he may have seen it just once in 1319 on his way to the siege of Berwick. Civil war between Edward II and his barons in 1322 resulted in Thomas being captured and executed.

The castle was of impractically large and much of the inside of the 68 acre site remained empty. John of Gaunt strengthened the castles defences and added two towers in the 1380’s. The castle was a focus of fierce fighting during the Wars of the Roses (1455-1485) being a Lancastrian stronghold. It was after this time that Dunstanburgh declined into the romantic ruin that inspired JWM Turner and artists alike.

Getting Here: Dunstanburgh Castle is a one mile walk north of the village of Craster along the Coast Path. Parking in Craster is very limited and we advise you to arrive in Craster by bus if you can. During the summer there is an hourly service to Craster (X18 and 418) - this is two-hourly from October to May.  English Heritage offer a 20% discount to visitors arriving by bus*. See our Getting Around page for detailed travel information.

Built on a dolerite outcrop, Bamburgh Castle is one of the largest inhabited castles in the country. Archaeological evidence shows that the whinstone crag provided a natural fortress for the Iron Age Votadini tribe in about 800BC. During the Roman period the dominant position over the coastline meant it was an intrinsic to the Roman coastal beacon system. The first written reference to Bamburgh was in 547.  In the 6th century the fort at Bamburgh was the seat of the great Anglo-Saxon kingdom of Northumbria. During the following three hundred years the kingdom grew and contradicted.  The crown changed hands through battles and succession.  It was when the Golden Age of Northumbria flourished.

The Normans built a new castle on the site, which forms the core of the present one. William II unsuccessfully besieged it in 1095 though the castle finally became the property of the reigning English monarch in that same year. As an important English outpost, the castle was the target of occasional raids from Scotland. In 1464 during the Wars of the Roses, it became the first castle in England to be defeated by artillery.

The castle that we see today is the work of the great Victorian industrialist William Armstrong, who bought the castle in 1894 and undertook a massive restoration of the castle to create country mansion to be used as a convalescent home but the 2nd Lord Armstrong, William’s great nephew, decided to make Bamburgh a family residence and Bamburgh Castle continues to the private home of the Armstrong family today.

Enjoy a great day out at Bamburgh Castle! You can explore 14 public areas and learn more about the castle from friendly knowledgeable guides and new audio tour. Watch history being uncovered during live archaeological excavations. Refreshments are available in the Clock Tower Tea Rooms.

Getting Here: During the summer Bamburgh is served by an hourly bus service (X18 and 418) between Berwick-upon-Tweed/Belford and Alnwick - this is two-hourly from October to May.  Bamburgh Castle offer a 20% discount to visitors arriving by bus*. See our Getting Around page for detailed travel information.

The Farne Islands is an excellent place to see breeding seabirds between April and July and offers  unsurpassable views of puffins, guillemots, razorbills, terns, eider ducks and shags. Grey Seals are present throughout the year and pups are born in the autumn.

These historic islands are closely associated with Celtic Christianity, St Cuthbert lived and died there in the 12th century and has a chapel dedicated to him. You can also visit Longstone Lighthouse, from where Grace Darling made her famous rescue in 1838.

Several boat companies take visitors to the islands and at specific times, you can land on Staple Island, Inner Farne and Longstone(fee payable to the National Trust). There are limited facilities and if landing on Inner Farne in spring, take a hat to ward off breeding Arctic terns.

Parking is limited in Seahouses. If you are booked on a specific sailing, allow plenty of time to find a place to park, or use the bus. Seahouses is served by an hourly bus during the summer (X18/418) between Berwick-upon-Tweed/Belford and Alnwick.  National Trust offer a £1 discount on landing fees to visitors arriving by bus*. See our Getting Around page for detailed travel information.

Sited atop the volcanic mound known as Beblowe Craig, Lindisfarne Castle is one of the most distinct and picturesque features of the Island and can be seen for many miles around.

Following the dissolution of the monasteries by Henry VIII, the Castle was built in the 1550's using stones from the demolished Priory. In 1901, Edward Hudson (founder of Country Life magazine) negotiated its purchase from the Crown and in 1902 Sir Edwin Lutyens (the well-known architect) began the conversion to create the Edwardian country house seen today. The Walled Garden (originally the Fort's vegetable garden but re-designed by Gertrude Jekyll in 1911 as part of the conversion) lies to the north of the castle some 500m away. Her plans were recreated by the National Trust and planted for the 2003 season.

Visiting: Holy Island is separated from the mainland by a vast system of salt marshes and mudflats and is only accessible at low tide by means of a causeway.  You must only cross when it is safe to do so. Check the crossing times before you visit. These times are also displayed at either side of the causeway. There is a bus to Holy Island and National Trust offer visitors arriving by bus 20% discount on entry*. The 477 runs on Wednesdays and Saturdays and daily during the summer holidays. See our Getting Around page for detailed travel information.

In the 7th century the Priory was one of the great seats of Christian learning in Western Europe and was where the beautiful Lindisfarne Gospels were written. It was founded by St Aidan in AD635 but owes its fame to St Cuthbert the most well known of Northumbrian holy men who lived and died there.

Ruined by Henry VIII, it is still a place of pilgrimage and visitors can walk around the beautifully decorated  and extensive ruins. Next door there is a visitor centre commemorating the life of the monks.

Visiting: Holy Island is separated from the mainland by a vast system of salt marshes and mudflats and is only accessible at low tide by means of a causeway.  You must only cross when it is safe to do so. Check the crossing times before you visit. These times are also displayed at either side of the causeway. There is a bus to Holy Island and English Heritage offer visitors arriving by bus 20% discount on entry*. The 477 runs on Wednesdays and Saturdays and daily during the summer holidays. See our Getting Around page for detailed travel information.

Built in the early 18th century to the design of the distinguished architect Nicholas Hawksmoor, the Barracks was among the first in England to be purpose built. The 'By Beat of Drum' exhibition gives you an insight into the life of the British infantryman from the Civil War to the First World War.

It also boasts a range of other temporary and permanent exhibitions to explore: The King's Own Scottish Borderers museum, the Berwick Gymnasium Art Gallery and the Berwick Museum and Art Gallery.

Getting Here: Berwick is well served by buses.  English Heritage offer a 20% discount to visitors arriving by bus*. See our Getting Around page for detailed travel information.