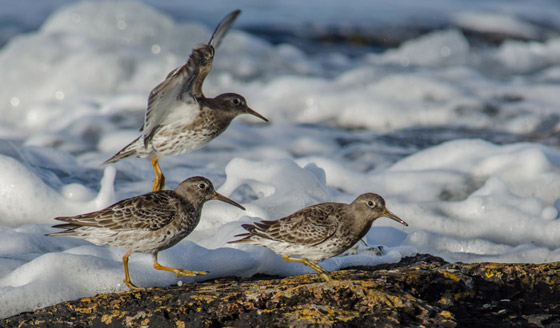 About this photo
The penny men Photo: Tim Melling

The penny men have been back at the Stag Rocks in Bamburgh for a couple of months now.

Penny men is a local name given to the purple sandpiper (Calidris maritima), a migrant wading bird which spends its winters on the Northumberland coast. They get their ‘proper’ name from the slight purplish tinge to their grey winter plumage - and you need to see them in the right light to even see that. Hardly an apt name for a predominantly grey bird.

The purple sandpiper is a medium-sized wading bird, slightly larger and stockier than a dunlin. It is greyish above (with a slight purple sheen) and whitish below. It has distinctive orange legs and in flight shows a white-bar on otherwise dark wings.

Ringing projects have shown that the purple sandpipers that spend their winters on the coast of Northumberland spend their summers breeding on the tundra of northwest Europe – Scandinavia and the island of Svalbard. Only about 13,000 birds winter each year in the UK. In some years one or two pairs are found breeding in the north of Scotland.

The best place to see purple sandpipers on the Northumberland coast is at Bamburgh. A regular wintering flock of up to 120 birds can be seen at the Harkess Rocks (or Stag Rocks - because of the white stag painted on them).

Other good places to see this species are on the rocks and seaweed in Craster and Seahouses harbours.

And the name Penny men? Well it seems to be confined to local use around Bamburgh, mainly among the fishermen. Nobody I have spoken to knows of its origins.

I have since been contacted by Ian Bell who said  "I have been looking at Heslop's 'Northumberland Words' vol. 2 published in 1894. Pennymen was the Bamburgh name for any of the small waders, the were referred to as sea-mice (pronounced sigh-mice) along the rest of the Northumberland coast."