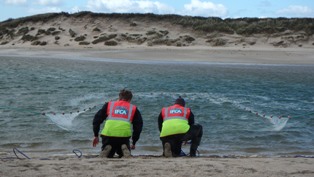 About this photo
Seine net on the Long Nanny NIFCA

Northumberland Inshore Fisheries and Conservation Authority (NIFCA) is responsible for monitoring fishing activity from the River Tyne to the English/ Scottish Border out to 6 nautical miles and up to the normal tidal limit (NTL) of estuaries. NIFCA also have a responsibility to ensure fishing activities do not have a significant impact on Marine Protected Areas within the NIFCA district.

In order to gather data to assist with monitoring and the evaluation of management measures, NIFCA have conducted a variety of surveys within the vicinity of the Northumberland Coast AONB throughout 2016-17.

In March 2017 NIFCA completed a year-long survey on small fish populations within Beadnell Bay and the Long Nanny River. The survey was conducted using a seine net and the data collected will be used to determine if the sites are important nursery grounds for various fish species such as Turbot and will also form part of a national project accessing food availability for the Little Terns at the Long Nanny Little Tern breeding site.

NIFCA also conduct bi-annual  seine net  and fyke net survey in the Aln Estuary. The catch  consists of a range of both marine and freshwater species. The most common species caught in the 2016 were Lesser Sandeel, Flounder and Sand Goby and the catch also included 2 European Eels. The data is used by NIFCA to monitor the condition of the Aln Estuary MCZ and is also provided to the Environment Agency.

NIFCA began a bi-monthly escape gap survey on the Authority’s Patrol Vessel, St Aidan in August 2016. This survey involves fishing two fleets of ten pots with and without escape gaps on rocky habitat throughout the NIFCA district. The result of this survey will be used to determine the effectiveness of escape gaps in allowing undersized lobsters and crabs to escape whilst retaining sized lobster and crab.

An annual survey of the mussel bed at Fenham Flats, Lindisfarne has been carried out by NIFCA since 2005. The survey method used enables Area, Percentage Cover, Biomass and Density to be calculated.  Annual size frequency distributions were produced from shell measurements taken each year and the results indicate that mean shell length of mussels at the site is increasing.

A new series of surveys are planned for 2017-18 when NIFCA will introduce new survey methods (beam trawl and grab sampling) as well as continuing with some of their existing surveys. For more information on any of the surveys, please visit the NIFCA website and view our annual survey reports.