What's in season and on sale at Farmers' Markets in April, May and June 2016 in Northumberland? 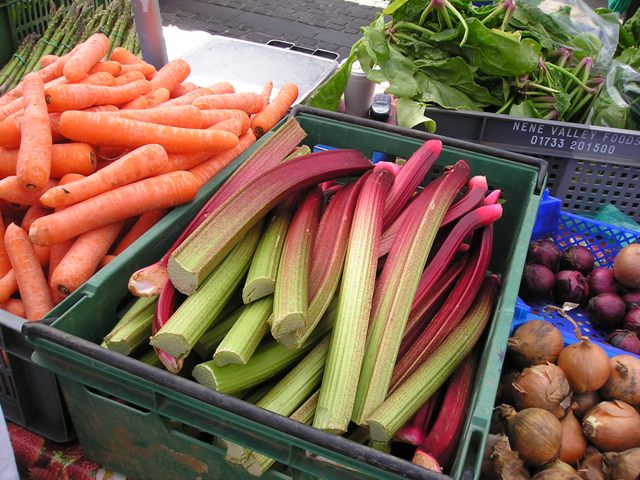 About this photo
Rhubarb on sale at a Farmers' market

I would like to tell you about my favourite local foods from Northumbrian Farmers' Markets due into season in the next three months. This food reflects the weather, the countryside in which it is produced and it changes with the seasons.

Farmers have told me that this year’s very wet but warm, windy winter has resulted in fallen trees and that the waterlogged land is affecting arable cultivation and stock grazing. They are hoping for some drier weather before the spring crops are sowed and cattle turned out onto the fields, but that the milder weather will help them with lambing in March and April.

For a special Spring dinner try Northumberland Poultry’s ducks, chickens and guinea fowl - all their birds range free in fields on the Rothbury hills. Their home-made chicken liver pate is delicious as is any soup made with stock from their double packs of chicken carcasses.

I spoke to Caroline, from Ridley’s Game, who told me that 80% of the Tyne Valley wild rabbit population was wiped out by recent flooding whilst pigeons have grown fat on the un-harvested pea fields. I love their wild rabbit, bacon and black pudding pie which won a ‘Great Taste Award’ last year, this year they will be entering their gluten-free wild venison burger with fresh basil and I am sure they will do well again. Venison is available all year and has almost no visible fat; I serve haunch and loin cuts as steaks with redcurrant jelly or casseroled with mushrooms. Ridley’s Game sell a very special wild venison ‘row rack’ cut as well as game birds, such as pheasant, partridge, mallard and pigeon which bring attractive variety to a menu accompanied with winter vegetables such as leeks, parsnips, beetroot, swede, cabbage and kale.

English asparagus will be in season for six weeks from May to the end of June. I enjoy this best with sea trout caught off the Northumberland coast and new potatoes ... delicious! You could follow this with a simple spring pudding that nothing can beat: gently stewed rhubarb, served with an egg custard. I’d also like to taste the beer brewed by Tyne Bank Brewery called Rhubarb and Custard – a full bodied oatmeal pale ale.

If I’m wanting to take a picnic when I go for my regular walk along the coast then a ploughman’s lunch is just right. I’ll take some slices of an artisan-made wholemeal cob from the Great Northumberland Bread Company - made with wheat grown in north Northumberland and milled at Heatherslaw - and choose a Northumberland Cheese which has been cellar matured for at least 3 months - Coquetdale, Reiver, Chevington or Brinkburn, and chutney from Willow Cottage Preserves or the Mad Jam Woman. I’ll find a sheltered spot looking out to sea to sit and enjoy my locally produced lunch.