This page provides information about the best places to go and watch the wonderful wildlife of the Northumberland coast.

From the frenetic seabird breeding colonies to the blaze of colourful wildflowers in summer spectacular flocks of waders and wildfowl and curious faces of grey seals in winter, there is plenty to see along the Northumberland coast at any time of the year.

This stunning film will whet your appetite for the wild places and wildlife that can be encountered in North Northumberland, both on the coast and in the Northumberland National Park

The Northumberland Coast is a bird-watchers paradise. Activity at the seabird colonies peaks in June and July. From August, passage migrants pass through on their way from northern breeding areas to their winter quarters and birds that come here for the winter begin to arrive.

Watching Seals and other marine mammals

The dune systems, meadows and the grasslands found on whinstone outcrops on the Northumberland Coast are home to an amazing array of plant life. 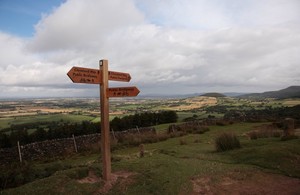 The new Code allows people of all ages and backgrounds to en...

Did you know every planning application in the AONB is looke...